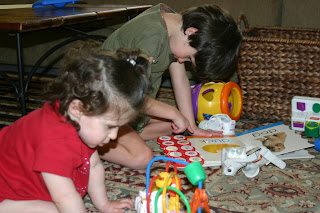 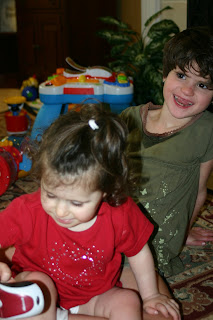 Hello to all from Sophie & Lily,
Many thanks to the Friedman family for inviting Sophie and me over to their home for a visit. They are great people and we are blessed to have met them. Sophie had a good time and made herself right at home. She scoped out the place as soon as her feet hit the ground. I saw a lot of similarities in Lily that Sophie had at her age. Oh yeah, Happy Birthday Lily. You can see in the photos that they had a good time playing. The one picture looks like each girl is really focused on their toy, such fun!! I wish I had known what I know now when Sophie was Lily's age. Maybe it would have made a difference in her now. Cant go back...only forward. It was really nice to be able to see another child with the same issues as my daughter. Also, I hope it was encouraging for Julie and her family seeing the progress Sophie has made. Lily is doing a little more than Sophie was at that age, but for the most part they are on the same path. Julie, I hope you remember the signs that I taught you today, there will be a quiz the next time I see you. LOL. Thanks again, Kim
Posted by Sophiesmama at 12:54 PM 1 comment: 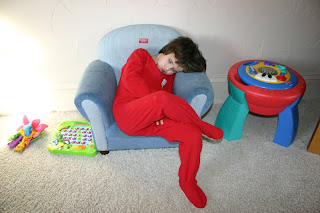 Our dr.s appointment went relatively well, considering the amount of information that we received on Sophie. This photo is how we all felt after 2 hours with the genetic counselor and Dr. Escobar. We were told of all the issues Sophie may face in the future. He was pleased with the fact that Sophie is walking independently and can get her point across by signing or by just going to get what she wants on her own. Right now, he is more concerned with her diagnosis of Chiari 1 malformation than with the 1p36. We have to take Sophie to a neurosurgeon within the month. We dont know a lot about this condition and it seems like we wont until we speak with the neurosurgeon. Dr. Escobar gave the analogy that her brain sits on a floor and the floor has a small hole which her brain is protruding through. This seems a little daunting to me. Im worried for her. Usually you see a neurologist before seeing a neurosurgeon. If anyone else has this issue, I would value and appreciate any information you would be willing to share. He said usually chiari 1 doesnt show up until late childhood or early adult. She is 7. Bless her little heart. On a brighter note, I read about how Nate and Melanie were able to get a Deaf mentor out in Utah. I have friends at the Indiana School for the Deaf and decided to see if Indiana had something like this. Apparently they are trying to get it started. They were just as excited to hear from us as I was to talk to them. I have been given the name of the lady in charge who is trying to bungle her way through funding, schools, etc. to get the mentoring program started. Yeah...thanks to Nate and Melanie for posting to get me started on a project to help Sophie and others like her. This blogging is great for "borrowing" ideas from others to see what is available in our area. I also called and spoke with Jill who works with Lisa Shaffer to see about the research they are doing on children with 1p36. I am enrolling Sophie in this study. So much to do and so little time to get it all done. Thanks to all who have offered their support to my family. Ive already had the chance to speak with a few of you who are on this blogspot. I cannot verbalize just how thankful I am to you. Julie...I am very excited about meeting up with you and your beautiful little Lily. kim

Sophie was born January 26, 2002. She was a healthy full term baby who weighed in at 7 lbs. 5 oz. Because she was not doing what babies her age were supposed to be doing at 2 months old, I had taken her to see a pediatric neurologist in Indy and he did a CT scan on her. His words were to me, "Bar any unforeseen circumstances, like falling off a horse, your daughter will never have to see me again." No offense to him, but boy was I glad. And boy was he wrong. Well, I guess it's how you look at it. I guess we didn't see him again. Sophie turned 6 months old and was still not hitting developmental milestones, so I requested an MRI from our family doctor. He ordered one and sent the images to be read by a doctor at Riley, who over the phone, told me my daughter had Periventricular Leukomalasia. Write down any questions and set up an appointment in 2 weeks. Really, that time in Sophies life is a blur. Doctors visits, blood work, and genetic screening. Nothing worth noting the doctors said. An anomaly. She wasn't premature, there were no brain bleeds and she didn't suffer from a traumatic birth. We were not new to parenting, Sophie is the youngest of seven. My husband and I decided to see Dr. Escobar at St. Vincents for another opinion. We heard he was the best. He ordered an ABR, swallow study, sleep studies, checked for a variety of syndromes and the the PVL diagnosis stuck. Dr. Escobar kept saying things like Sophie has a large soft spot, small features, low set ears, deep set eyes...I think something was always tugging at him. April 2, 2009 he asked us if we wanted to do another round of genetic testing. He said that science and technology were far more advanced than they were almost 7 years ago. We went right down to the lab, had the blood drawn and we went home 4 vials short of blood and an MRI scheduled in two weeks. I called him back this past Monday and the genetic blood work was back. Her new diagnosis is 1p36 deletion syndrome. All her chromosomes were fine, except the first one. The top portion of Chromosome 1 was lost, gone, not there, missing...No idea what that meant. Until I hit enter in my search engine. WOW!!! 8% of the human DNA is in that #1 Chromosome. Seems like a lot to me. I know that the past 7 years sure fell into place right then and there. Photos of children I had never known existed, looking A LOT like my daughter. One girl I found could have passed as a twin to Sophie. The more I read the more I cried. Not sadness, well maybe some, but mostly relief. I realize 100 documented cases isn't a lot, but it sure beat the sense of no reason what so ever. I have poured over this site for 3 days now. Trying to learn as much as I can so that when we go see Dr. Escobar on Monday Ill have my pad of paper loaded down with questions. Then to top all this off, there is going to be a conference. A conference 45 minutes away. There is so much I want to say, so much I need to learn...what a great place to start. kim
Posted by Sophiesmama at 3:54 PM 1 comment: 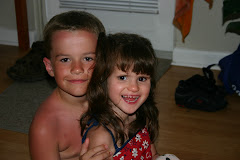 with her brother kolton